Out of the darkness

Over three years ago, these animals were rescued from a roadside zoo. Now their story can be told.
By Brianna Grant and Emily Hamlin Smith
Share

Three kangaroos were found living together in a small enclosure at an unaccredited zoo outside Montreal. Now they’ve found a home at our Black Beauty Ranch sanctuary.
Meredith Lee
/
The HSUS

When rescuers slowly creaked the rusty door open, the dilapidated building appeared to be empty. Windowless and dark, the sheet-metal structure held no noise, only air thick with spiderwebs, dust and the burning smell of ammonia. Then a head with small ears popped into the slice of sunlight, tiny eyes blinking rapidly to adjust. The baby kangaroo lifted his nose to sniff the fresh air while his mom cautiously hopped out of the shadows.

It’s been more than three years since this scene unfolded at a roadside zoo in Canada. Now the story can finally be told. 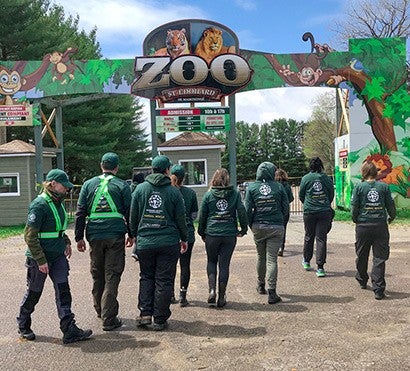 The Animal Rescue Team entered the Montreal zoo in May 2019 and rescued more than 200 animals.
HSI

Humane Society International/Canada and the Montreal SPCA rescued this kangaroo family and more than 200 other wild animals from the unaccredited zoo in May 2019. In November 2021, the owner of the property pled guilty to four charges relating to the animals’ conditions, including lack of veterinary care for injured or sick animals, inadequate facilities and unsanitary conditions.

To protect the integrity of the case, delayed by COVID-19 and other factors, HSI can only now share details about the animals, the conditions they endured and their new lives in sanctuary.

From the outside, the Saint-Édouard Zoo outside Montreal appeared to be a fun, family-friendly attraction—the sign showed a camel, zebra, mountain lion and bear outside in what appeared to be their natural habitats. But that’s the problem with roadside zoos—visitors never see the whole picture.

If they were to look closely, they would notice the shoddy fences and overgrown vines. The lone peccary, a social wild pig species, pacing deep grooves in his yard—a sign of chronic stress and anxiety. The sharp ridge down the chest of the bald eagle, a sign of emaciation.

But the school groups, local residents and tourists who came to this zoo would never have known about the dark secrets lurking beneath the soil—where rescuers found the headless body of a young lion, an animal many patrons likely posed with for photos before he was cruelly discarded.

Visitors never would have seen inside the sheds where animals such as the kangaroo family spent the off-season—stashed out of sight like holiday decorations, forgotten until it was time to put them back out on display.

From the outside, the zoo appeared to be a fun, family-friendly attraction. But that’s the problem with roadside zoos—visitors never see the whole picture. 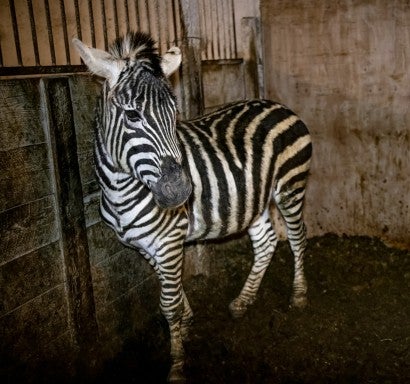 Now called Zuko, this zebra was roughly 6 years old when he was rescued. Responders found him standing on layers of waste in his stall.
Meredith Lee
/
The HSUS

The kangaroos—now named Ross, Rachel and Joey—had one another for company, but other animals—a lone zebra, a single wildebeest—were not so fortunate, remembers Kelly Donithan, HSI director of animal disaster response, who was on the ground during the rescue and helped care for the animals during the long months that followed.

“These are powerful, majestic species that traverse hundreds of miles in massive herds in Africa,” Donithan says. But at the zoo, they languished for months tightly confined—alone.

The zebra, now named Zuko, and the wildebeest, Wolfgang, stood on layers of waste in their tiny stalls, their hooves overgrown and filthy. No clean, dry hay to sleep on. No fellow member of their species for companionship. Wolfgang appeared especially anxious, frantically tossing his head as a clear warning to stay back.

“For me, these represented some of the worst cases of abuse and neglect,” Donithan says. “A herd species kept like that for even short periods is like placing a fish out of water.”

On the morning of the rescue, Rebecca Aldworth, executive director of HSI/Canada, stood in front of a camel later named George, his hair matted and filthy. She offered soft words of reassurance as he peered out from an enclosure barely large enough for him to stand tall or turn around. “We’re going to get you out of there,” she murmured, reaching out to pat his head. “You’re OK now.” Donithan brought him a bucket of fresh water—there was a dead mouse floating in his bowl—and he slurped it up so quickly that she brought him a refill.

Nearby, rescuers found a nervous emu they named Nemu. His overgrown enclosure was prone to flooding and received very little sunshine, leaving it perpetually muddy, with only a rickety, waste-filled barn for shelter.

A nilgai named Norman also had a small, ramshackle barn as his only shelter in an area vulnerable to floods after heavy rainfall. He followed responders who passed by along the fence of his enclosure until he reached the end, seemingly desperate for companionship and an escape from his miserable surroundings.

Douala, a lioness, and tigers Serenity and Theodora paced inside their barren enclosures while keeping a careful eye on rescuers as they moved about the property. The big cat area was poorly designed and constructed, fraught with weakened spots from the animals’ nervous chewing—putting the big cats, their caretakers and the general public at great risk.

Theodora and Serenity, most likely sisters, both showed characteristics of inbreeding, sadly a common practice in roadside establishments. Theodora had a slight head tilt, making her head appear wobbly as she walked, and Serenity had a perpetual squint in one of her eyes.

“It’s extremely difficult to provide these animals with the environment, diet and enrichment they need,” said Adam Parascandola, vice president of our Animal Rescue Team, while walking the grounds the day of the rescue. “It’s heartbreaking to see them in these conditions.”

Thankfully, this is not where the story ends.

The kangaroo family, Zuko, Wolfgang, Nemu, Norman, Douala, Serenity and Theodora are all living their best possible lives at Black Beauty Ranch, our sanctuary in Texas. Sadly, George was unable to travel across the border because of his health—HSI/Canada continues to provide care for him while seeking a permanent home. The other animals are safely living out their days elsewhere across North America.

For the first few months after their arrival, Theodora and Serenity had little energy and spent most of their time lying on their platforms. Slowly, the tigers became more comfortable and began exploring their new home, discovering a shared affinity for playing in water. Looking at them now, Owen says there’s a “night-and-day difference.” “They’ve really developed personalities,” she says.

Recently, the tigers were moved to a larger, three-acre enclosure with a small pond. One day sanctuary staff found the tigers covered in mud after a long play session in the pond, Owen says.

The other animals have come out of their shells, too. Douala the lioness can be heard from over a mile away, roaring for breakfast as the sun rises. In their enclosure near the front office, the kangaroos spend their days basking in the sun and hopping around. A large, grassy field provides ample space to exercise their powerful hind legs. When they want a break from the sun, they can lounge under a cluster of sunshades or in their open-door shelter.

The kangaroos have even welcomed a new member to their family. Little Chandler arrived at Black Beauty Ranch so young he was still in his mother’s pouch. The family is blossoming together, Owen says. Ross has become the leader of the group and looks after the family.

Zuko and Wolfgang, both found in isolation at the zoo, now live next to each other and have become constant companions. Despite being separated by a fence for safety reasons, the two animals spend most of their time standing side-by-side across the partition. Zuko also has addax companions within his enclosure and shares a fence line with two nilgais: Norman, who also came from the zoo, and Nigel, a longtime sanctuary resident. Nigel’s former herd mates had passed away from old age, but Norman’s arrival gave him the chance to interact with another nilgai. The two quickly bonded, and young Norman acts as the protector of geriatric Nigel.

The rescued animals are almost unrecognizable from the reserved individuals who arrived at the sanctuary between 2019 and 2020. Their story started in the shadows of dark sheds and cramped stalls, but at Black Beauty Ranch that story continues to unfold as they heal in the light.

You can help us care for these animals and continue all our lifesaving work. Donate