You’d think it would be easy to persuade people to protect prairie dogs: Not only are they a keystone species, with nine other species directly dependent on them for survival, but they’re also irresistibly cute, with big eyes and big personalities.

Yet the personable little rodents often find themselves at the center of local politics, with decision-makers balancing the preservation of their habitat against agricultural land needs, as well as the comparatively high cost of relocation versus “lethal management” (the official term for injecting carbon monoxide into prairie dogs’ tunnels). Last year in Boulder, Colorado, the city council compromised by relocating 30 to 40 acres of prairie dogs to a wildlife refuge and “lethally managing” 100 to 200 acres annually for three years.

As part of this project, the Humane Society of the United States’ wildlife protection program director, Lindsey Sterling Krank, and her team spent three months relocating prairie dogs—trapping, transporting and digging artificial burrows—and training new technicians and government agency employees to do the same. Every day, they watched a contractor across the street gas the very same animals they were toiling to save.

By the project’s end, the team had saved 557 prairie dogs. It was a huge achievement, yet they struggled to let go of the dozen who avoided the relocation traps, knowing they’d also be killed.

Roughly a dozen prairie dogs were lost on Sterling Krank’s site in Boulder, but across the planet, we’ve lost two-thirds of our wildlife population in the past 50 years. Billions of animals live short, miserable lives on factory farms, an estimated 500,000 dogs languish in U.S. puppy mills, millions of animals around the world suffer and die in archaic laboratory tests and the list goes on. In the face of immense suffering and loss, how can we try to save animals without breaking our own hearts?

For those in caring professions like healthcare, the cumulative stress of helping others is often referred to as “compassion fatigue.” It’s a real phenomenon, but Sterling Krank says the term doesn’t truly pinpoint what she and other advocates are feeling. Those in the animal welfare or conservation fields might instead feel something like disenfranchised grief, which is grieving a loss that society at large doesn’t recognize as real, or vicarious or secondary trauma, which results from working with trauma survivors.

Most people don’t consider animals killed in factory farms or wildlife displaced during development worthy of grief, or consider that dogs rescued from meat farms or puppy mills might need special care to manage their trauma. Because the emotional impacts of working with animals aren’t in the public consciousness, animal professionals might question their feelings’ validity or struggle to share the realities of their work.

Undercover investigators might witness cruelty daily, says Whitney Teamus, an HSUS investigations manager who saw buckets filled with dead piglets and both routine and emergency surgeries performed without pain relief when she worked undercover at a factory farm. “I don’t know how people would be able to perform their job if they couldn’t compartmentalize their emotions and their work. [...] It’s a tough muscle to flex. It can definitely lead to having some emotional hangovers.”

I don’t know how people would be able to perform their job if they couldn’t compartmentalize their emotions and their work. … It’s a tough muscle to flex.

Because their work is confidential, investigators can’t discuss what they’ve seen—which means they can’t share their feelings with friends and family. Teamus compartmentalizes by focusing on the minutiae, like recording dates and times. During moments that become “seared into my memory like a brand,” she focuses on capturing the shot for others to witness. But some cruelty needs context beyond a lens, “so it just sort of lives and dies with me, and those are the hardest moments.”

Sorting through the disturbing videos, photos and notes from investigations can also be challenging, says Kathleen Summers, HSUS director of puppy mill outreach and research, who builds reports on puppy mills and pet stores for media and law enforcement. Although her team has helped shut down some of the country’s largest puppy mills and problematic pet stores, “in many cases, the pet store didn’t shut down, and we don’t know what happened to the dogs, and in some cases the puppies died,” she says. With no direct outlet for those emotions, they can spill over in unhealthy ways, such as anger transference. Sometimes Summers is driven to work even harder to protect animals; other times, she needs to decompress after a workday “and do something that’s not related to animals for a while.” That’s a boundary many advocates struggle to set—after all, there are always more animals to help. Sterling Krank says she used to “push and push and push, harder and harder and harder.” Now she’s slowing down and being more strategic so she can sustain her efforts. 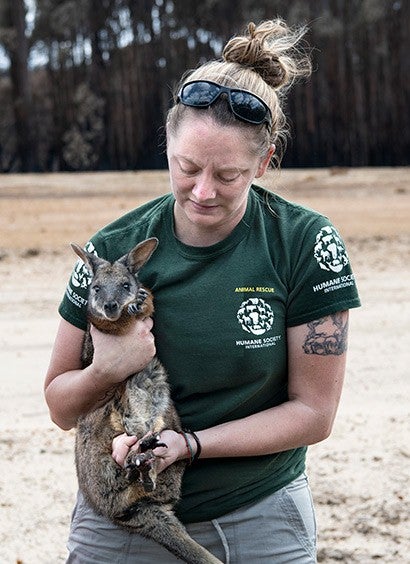 “You’re not only dealing with your own trauma, but then the animal’s trauma. And it’s hard not to internalize that at times,” says Kelly Donithan.
Meredith Lee
/
The HSUS

Yet “there’s still a stigma, or sort of a fear, of sounding like you’ve burned out or that you have a limit,” says Kelly Donithan, director of global disaster response for Humane Society International. Donithan has worked on the front lines of wildlife protection since her college days: While obtaining her master’s in conservation medicine, she went undercover at wildlife auctions. Since then, she’s worked at a bear rescue in Viet Nam; on big cat, roadside zoo and dog meat farm rescues; and with wildlife during the 2019 bushfires in Australia. She was called a “hero” for rescuing kangaroos, koalas and more.

But an estimated one billion animals died. Donithan describes evaluating which kangaroos were too burned to survive and which joeys—so tiny they fit in the palm of her hand—were too young to survive without their mom. She cradled suffering animals in their last moments, remaining silent in deference to their wildness. She still has nightmares.

Stories like Donithan’s are why Sarah Bexell, University of Denver clinical associate professor, and social worker Katia Nikitina, Institute for Human-Animal Connection special projects research coordinator, recruit wildlife conservation and research professionals to share their work experiences. It’s part of a pioneering project that aims to find a clinical name and definition for the psychological impact of wildlife loss.

By identifying the psychological effects of advocacy work, Bexell and Nikitina hope to equip mental health professionals with resources to support advocates. They theorize that many in the field are experiencing trauma and need trauma-informed care.

There are really no resources out there for people to continue doing this work, and it takes so much resilience and strength just to continue going through every day.

“So many of our participants have had animals die in their hands ... the emotional burden is just so extreme, and then they hold that disenfranchised grief because everybody’s like, ‘Oh, it’s just an animal. Get over it,’” says Bexell. “There are really no resources out there for people to continue doing this work, and it takes so much resilience and strength just to continue going through every day,” Nikitina explains. To protect the future for all of us, you have to protect those who advocate for animals, she says.

Conditions like compassion fatigue were once diagnosed only in healthcare workers and animal shelter staffers, but psychologists now know that the mental toll of caring about the world can be damaging to everyone’s mental and physical health.

“There’s a lot of our content that can be really graphic, and the public can only handle so much of that before they turn away,” says Teamus. Rather than show the entirety of the brutal footage, HSUS video producers give glimpses of the larger suffering. “We have to keep it reasonable,” says Teamus. “But suffering is not reasonable. And so there’s a lot that our team witnesses that never is seen by anybody else.”

Denial is a common psychological response to overwhelming suffering. It’s probably one reason why many animal welfare professionals and advocates don’t talk about their work—and why much of the general population can’t acknowledge the enormity and tragedy of animal suffering, says psychologist Karyne Messina, who compares the trauma of witnessing animal loss to witnessing a terrible accident. But the American Psychological Association argues that denial prevents us from building psychological resiliency and from tackling big problems. Psychologists who study post-traumatic growth often recommend a strategy that might, at first glance, appear woefully inadequate: fostering optimism.

Yet many animal advocates agree, arguing that optimism is necessary for both their mission and their mental health. In 2010, conservation scientist James K. Sheppard and Ron Swaisgood, general scientific director at Cocha Cashu Biological Station in Peru, wrote a paper titled “The Culture of Conservation Biologists: Show Me the Hope!”

“The human brain is wired to try harder only when there is reason to believe that those efforts will make a difference. Call it what you want, but the convenient label for this belief that one’s actions will make things better is ‘hope,’” Swaisgood shared in an interview with news platform Mongabay. Adds Sheppard, “Becoming hopeful, like becoming happy, requires practice.”

And just as you don’t have to be a scientist or professional advocate to feel fatalism, you don’t have to be one to practice hope. Think of the 557 prairie dogs saved in just three months; new state laws that prohibit the sale of dogs, cats and rabbits in pet stores; the growing list of companies that won’t use fur or test their products on animals; and the strongest farm animal protection law in U.S. history, California’s Prop 12, going into effect this year. Consider that last year, volunteers counted 250,000 Western monarch butterflies in California after counting just 2,000 in 2020. Ecologists aren’t sure why, but one theory is that the state’s devastating 2019 wildfires prepared the soil for a spectacular wildflower season that fed migrating monarchs.

When it all seems overwhelming, remember that everywhere, people are trying to save our bittersweet birthright: A world and inhabitants so beautiful, it’s crushing to see their suffering and demise. But we can’t help if we’re crushed under the weight of responsibility and grief.

Trying is enough. For our own sakes, we have to let it be enough.

Everyone can benefit from safeguarding their mental health against the world’s woes. Try these combined tips for building psychological resilience from our staffers, the American Psychological Association and Seattle-based psychologist Andrew Bryant.

Feel: Acknowledge that your feelings are real and valid, and take steps toward finding purpose and meaning in your emotions and experiences.

Talk: Release and process those feelings—and determine your capacity to act on them—by writing in a journal or talking about them with peers or a therapist. One brain imaging study showed that labeling your emotions decreases activity in the brain’s emotional center.

Unite: Connect with like-minded people through advocacy groups, volunteer networks and even hiking or birdwatching clubs. Studies show that spending time in nature, being with animals and making social connections all provide mental health boosts.

Act: Find ways to act on what you care about most. A strong source of personal meaning, as well as a belief in your own ability to create change, is correlated with fewer symptoms of depression and PTSD.

Breathe: When you acknowledge how you feel, you might realize that you’ve reached your capacity to act for the moment. It’s OK, and often necessary, to pass the baton when you need a breather. Experts recommend exercise, meditation and taking a break from social media to help quiet your mind.