Before and after photos show the power of animal rescue

Catching up with a few animals whose remarkable spirits touched our hearts
BY Karen E. Lange
Share

Halfway around the world from the South Korean dog meat farm where she was rescued, Minnow lives a second, better life in the Virginia countryside. Says her adopter, Abbie Hubbard, “Animals absolutely can learn people are good and the world is safe.”
Meredith Lee
/
The HSUS

It makes sense that her best friends are turkeys. Minnow spent the first five months of her life on a dog meat farm in South Korea before she was rescued by Humane Society International in 2015 and adopted by Abbie Hubbard, who worked at a Virginia shelter where the rescued dogs were flown. Hubbard’s rescued turkeys were also once on their way to being eaten. First Minnow bonded with Blossom, who came from a factory farm. Now she hangs with Rosie. And she welcomes every foster or adopted animal Hubbard brings to her rural Virginia home: kittens; two parrots and a parakeet; two gerbils, who Minnow let crawl over her; and chickens, including a juvenile rooster whom she allowed to sleep in her tail and ride on her back. “Minnow’s a friend to everyone,” Hubbard says. “That’s her thing.” 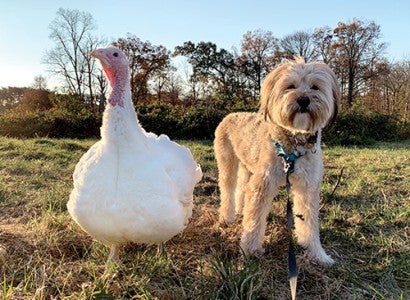 Six years out from the meat farm, Minnow has recovered from surgery to repair a ligament injury, most likely suffered when her leg fell through a wire cage floor on the farm. She loves tearing across grass and bounding through snow and splashing through water. Unlike most dogs from meat farms, Minnow was rescued young, so it was easy for her to learn to feel safe and allow herself to be touched, Hubbard says. She sleeps in Hubbard’s bed (with Rosie on the floor next to them) and accompanies Hubbard everywhere. If turkeys or chickens wander over to the fence, Minnow puts herself between them and the neighbor’s barking dogs. While working for HSI in 2016, Hubbard met a farmer giving up dogs raised for meat. She showed him and his wife photos of Minnow. They asked whether their dogs would enjoy that kind of life. When she said yes, they cried.

Maybe she was the runt of the litter. Or perhaps she was stunted. Whatever the reason, the little black cat rescued in 2019 with around 200 others from a home in Killeen, Texas, was so small for a month-old kitten, she earned the name “Tiny Tina” when she leapt out of a cage and into the arms of Jenn Cherry, a member of our Animal Rescue Team. Breathing through her mouth, with a runny nose and gummed-up, infected eyes—the right one crusted shut—Tiny Tina was rushed to a veterinarian. Moved by the little cat’s need, rescue and response volunteer Denise Folcik adopted her.

An infection suffered as a kitten when she lived in a cage still clouds Tiny Tina’s eye.
Meredith Lee
/
The HSUS
Today, bold and sassy, Tina is chief cat in a Texas home.
Alyssa Schukar
/
AP Images for the HSUS

Not too long after Tiny Tina arrived in Folcik’s home in Waukesha, Wisconsin—after her respiratory and eye infections cleared, leaving only a scar on her right cornea, and a case of ringworm was successfully treated—the sweet, cuddly little cat was transformed. Folcik has five other cats—all males—and a big mixed-breed dog named Pongo. Tiny Tina rules. “She has a huge, huge, huge attitude. She struts around like she’s a queen,” Folcik says. As Tina passes Folcik’s big silver Persian, she swats him. She walks casually between Pongo’s legs and touches his nose. She tears toy mice off their strings and carries glitter balls to Folcik to throw again and again so she can fetch—as many as 20 times in a row. She is so over her unfortunate early days.

Cherry has a tattoo on her arm of Tiny Tina piloting a plane. The picture includes the names of two kittens from the same rescue who did not make it. “Tiny Tina is my little survivor.” 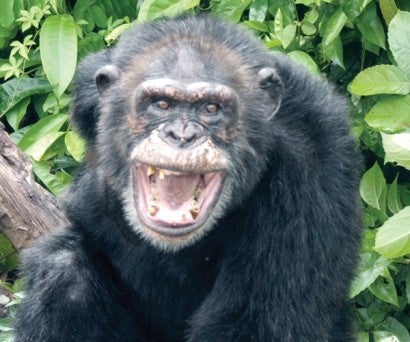 Bullet’s face says it all: Before the HSUS and HSI started providing food twice a day, he was desperately hungry
Richard Ssuna
/
HSI

The elderly chimp has endured so much, starting with a shotgun blast that killed his mother in the forest and left him without an arm—the injured limb with a broken bone had to be amputated. After his capture in the mid 1970s, Bullet lived in cages at a research facility on the Liberian coast, brought out only to be infected with diseases such as hepatitis. He was sedated more than 400 times, went through hundreds of blood draws and suffered 55 liver biopsies. In 2008, Bullet was released with 10 other retired chimps onto a small island, dependent on food deliveries once every other day. When funding for these deliveries stopped in 2015, the HSUS and HSI stepped in and rushed emergency provisions to the chimps. Hungry, his ribs sticking out, Bullet greeted the boats with desperate cries.

Now, 44-year-old Bullet—and the other chimps living in what is now HSI’s Second Chance Chimpanzee Refuge Liberia—is used to eating twice a day and is relaxed when caregivers arrive. He stands apart from the other chimps and mimes for what he wants—pineapple, papaya, bananas, mangoes, oranges. He methodically carries his food to a pile, unhurried, knowing no one will steal from him: The younger chimps defer to him, even though he has no teeth. He sits and eats calmly. Sometimes Lolo, the group’s alpha male, will run toward Bullet in what looks like a display of dominance, but at the last second Lolo will jump over the older chimp, turn and hug him.

Richard Ssuna, director and senior veterinarian at the refuge, says Bullet presides like an elder over the island’s other chimps. “He is self-assured,” says Ssuna. “He is quite aware that he is a highly respected individual in the group.” Life is good. 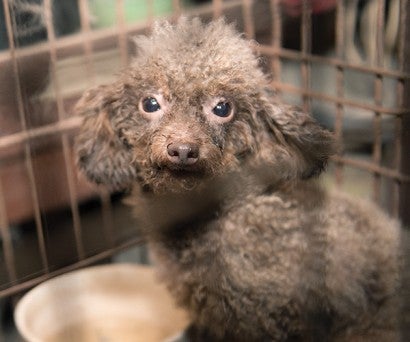 An ungroomed B.B. found in a dirty cage on a puppy mill.
Amie Chou
/
The HSUS

One moment, she was in the cage where she had spent her whole life giving birth to puppies. The next, B.B. the poodle—named for B-18, the code assigned to keep track of her during the rescue—was carried out of the basement of a North Carolina puppy mill in 2016 and into the sun. Held by an HSUS rescuer, she squinted in the light, her curly fur filthy, her paws carrying marks from the wire cage floor, her lower jaw weak from rotten teeth, her friendliness and faith in human beings undiminished. When she got to her new home with Cabarrus Animal Hospital receptionist Brenda Tortoreo, throw rugs made her anxious. Grass terrified her. Loud noises and sudden moves sent her into a panic. Tortoreo let her sleep in her bed (B.B. still does) and surrounded her with little stuffed animals, which B.B. moved near her belly, as though she was nursing them.

Little by little, Tortoreo has worked with B.B. to get over her fears. Venturing into the backyard began with two or three steps on grass, followed by a rush back to Tortoreo across the concrete. Now B.B. runs all over the lawn. She has overcome shyness to bark at the dogs next door. After three years of not engaging much with toys, she grabs them and shakes them, especially her favorite bunny. She’s comfortable lying next to Tortoreo’s Maltese, Treeko.

Things aren’t perfect: B.B. isn’t reliably house trained and even when she’s full, she guards her food from Treeko and Tortoreo’s other dog. But Tortoreo says that’s OK. When she met B.B., the poodle’s eyes said, “I’m scared.” The only way to respond to that, Tortoreo says, is with love and patience.

Pulled from a puppy mill cage, a rescued B.B. enjoys a soft bed and an adopter’s warm companionship.
Amie Chou
/
The HSUS

Never in her former life had Eve the black bear seen one: a tiger in the grass. Earlier this year, as a rescued big cat named India moved in next door at Black Beauty Ranch, our sanctuary in Texas, 3-year-old Eve followed her instincts and climbed her favorite Southern pine to get a safe look. The bear had started her life in Northern California. But a bad case of mange left her furless and suffering from a fungal infection and weight loss. Captured on Christmas Eve of 2017, Eve “the Bare Bear” was taken to a wildlife center near San Diego. In December 2019, when it became clear her coat wouldn’t fully regrow and she wouldn’t survive in the wild, she was moved to the sanctuary, where she has neighbors not usually found in California or Texas and a half acre of woods to roam.

Eve no longer looks naked. Sun-bleached light brown fur has regrown thickly between her shoulders and along her back. She’s healthy and, after senior animal caregiver Christi Gilbreth sat near her enclosure during the early days at the sanctuary, confident and secure. Her favorite foods: canteloupe and honeydew melons. Her favorite game: pouncing on the drain of her pool so the pressure builds and the recirculating water shoots up from a spout. When Russell—a 2-year-old black bear who arrived at the sanctuary with his mother in the fall of 2020—sneaks up on Eve from his adjoining enclosure, she huffs and stomps her feet until he backs off. She can’t return to the wild, but a bit of the wild has returned to her.

Transformed from her toes to her snout: When she started treatment for a severe case of mange, Eve “the Bare Bear” had almost no fur and zero chance of survival in the wild.
Chris Headworth
/
Fund for Animals Wildlife Center
Now Eve's coat and health have come back, and she’s safe at Black Beauty Ranch.
Maura Flaherty
/
The HSUS

It took a lot to win Jonas’ affection after HSUS rescuers pulled him from a feces-encrusted crate in the basement of an old house in western Pennsylvania in 2019. Skinny, with a sunken face and rotting teeth, Jonas looked as though he wanted human attention. But whenever anyone opened the door of his cage at the temporary shelter, Jonas rushed to the back. Over time, he came out to play with other cats. Then one day, after about four months, rescuer Jenn Cherry returned from time off to find Jonas in the arms of his caregiver, Ariel Galinskas, snuggling into her shoulder, letting her pet him and brush him. “Jonas was finally like, ‘This is one of my people.’ ”

Jonas and the other cats had more than the usual time with Ariel and the other caregivers. A pending neglect case required them to be held as evidence while the case against their owner proceeded, and the COVID-19 pandemic slowed down the legal process. Fed from a spoon and treated with catnip, he gained weight and relaxed. Monday was puzzle day, Friday grooming day, Saturday all the toys came out for party day and Sunday was nap day. Every day, caregivers played soothing music and gave him hugs.

After 18 months, Jonas was on his way to being adopted when a veterinarian discovered a tumor deep in his throat that was causing him to drool more and more and would soon make it difficult for him to swallow. He would have to be euthanized. The news hit Cherry hard. Everything they had been working for gone. But then she realized that at the temporary shelter, Jonas had finally known love. “The last year and a half of his life was phenomenal. He was our baby.” They had given him his happily ever after.

Jonas was found in a filthy crate in a Pennsylvania basement.
Meredith Lee
/
The HSUS
Saved from neglect, Jonas was pampered during the last months of his life.
Tiffany McBee
/
The HSUS